The parents of three sisters had described receiving desperate phone calls from their trapped daughters just minutes before they died in a locked cinema as flames engulfed a Russian shopping center. On Monday, a litany of fire safety violations was blamed for the death toll in the fire in the industrial Siberian city of Kemerovo reaching as high as 64. Investigators said fire exits were blocked, and a security guard switched off the fire alarm system after the fire broke out. On Monday, four people were arrested and questioned by police, including the company’s head responsible for servicing the fire alarm system and the technical director of the company that owned the shopping center. 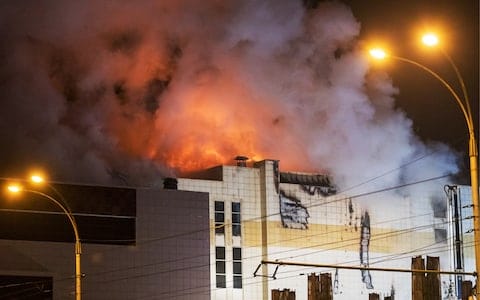 “Our children burned while we just watched,” said Olga Lillyevyali, who rushed to the shopping center as the fire was underway, Russian news website Meduza reported. Her three daughters, twins, aged 11 and their five-year-old sister, had been dropped off at the cinema by their father, Alexander Lillyevyali, to see the children’s film Sherlock Gnomes earlier that afternoon. When he got a phone call an hour later from one of his daughters to say she was stuck behind locked doors as the fire spread, he raced upstairs.

Russian media reported local people saying that the cinemas in the shopping center locked their doors to stop people from entering without a ticket. “I started to crawl, but I realized I had no strength,” Mr. Lillyevyali.“I had inhaled so much smoke that I was on the verge of fainting. My daughter was ringing and ringing me. I could only shout down the phone that she should try and get out of the cinema, but I couldn’t do anything – there were flames in front of me.”Media reports suggested the initial blaze broke out on the fourth floor of the building, possibly at a trampolining center, and spread rapidly, generating huge clouds of billowing black smoke.

Eyewitnesses said that staff did not arrange for evacuation from the building, converted from a former confectionery factory in 2013. Some were quick to blame lax regulations on Russia’s fire safety inspection authorities, who have been accused of taking bribes to turn a blind eye to breaches. Opposition leader and anti-corruption activist Alexei Navalny wrote on Monday: “the whole system of fire safety oversight has become a huge trough of corruption. It hasn’t had any other goals for a long time.”On Monday, the Prosecutor General’s Office ordered all shopping malls in Russia to be checked for fire safety features.

President Vladimir Putin, re-elected last weekend, has yet to speak publicly about the tragedy, which has stirred deep anger in Kemerovo, a coal-producing region about 3,600 km (2,200 miles) east of Moscow. The Kremlin published a statement, saying Mr. Putin “expressed his deep condolences to the relatives and loved ones of those who died.”

On Monday, an eleven-year-old boy was in intensive care after jumping from a third-floor window to escape the thick smoke during a dramatic escape caught on camera. It was not immediately clear how many other children had died in the blaze, with authorities saying 8 of the 23 victims so far identified were kids. Still, the shopping center was full of families enjoying the first weekend of the Easter school holidays. A young girl from the central Russian city of Kazan, Maya Yerokhina, believed to be among the victims, updated the status on her profile page on Russian social networking site Vkontakte during the fire to read: “This is the end.” 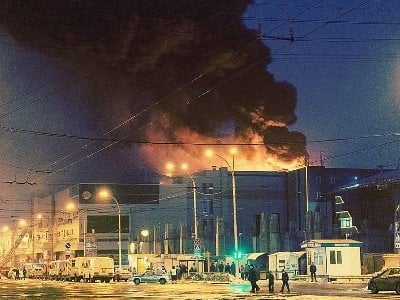 Both his parents and a sibling were reported to have died. One piece of footage aired on state television showed people desperately trying to escape by battering down a closed-door as flames crept closer. Eight children, mostly aged between 11 and 12, from the same school in the local village of Krichevsky perished in the blaze while on a trip marking the end of the school term. One of the girls from the group, 12-year old Viktoriya Pochankina, reportedly got through to her aunt from the burning cinema and asked her aunt to tell her mother she loved her. Some 200 animals, including rabbits, turtles, pigs, goats, are also believed to have died in the shopping center’s petting zoo. As Russia tried to process what had happened, an official period of mourning was declared, and locals brought flowers and candles to the blackened remains of the shopping center.

One sign left at the site read: “Forgive us, children.” Local hospitals reported an influx of people wanting to donate blood for the victims. Stories of feats of bravery also emerged. Local schoolteacher Tatyana Darsaliya, 36, reportedly led her own daughter to safety and then returned to the burning building to try and save other children. Darsaliya’s daughter, Eleonora, wrote that her mother had “died like a hero.” Preliminary findings of an inquiry said the fire started in one of the cinema halls and destroyed more than 10,700 square feet (1,000 square meters) of the center, news agencies reported.”The roof collapsed in two theatres in the cinema,” the Investigative Committee said. Emergency services battle the flames. Hundreds of firefighters battled the blaze for hours. CREDIT: DANIEL AIKIN/TASS VIA GETTYAround 120 people had been evacuated from the burning center, rescuers said.

“This shopping center on several floors was packed with people mid-day Sunday,” said Alexandre Eremeyev, an official with the local Russian emergency services ministry. The site of a fire at the Zimnyaya Vishnya shopping center Burnt debris outside the shopping center CREDIT: MAXIM GRIGORYEV /TASS/Getty added: “No one knows exactly how many people there were inside when the fire broke out.”Where to look for people? How many are there? That has greatly complicated the work of the firefighters.”Hundreds of firefighters spend hours tackling the blaze. Around 300 firefighters and rescue personnel rushed to the scene and tackled the blaze for more than 17 hours. Russia’s minister of emergency services, Vladimir Putchkov, has gone to Kemerovo, RIA Novosti said.